She Begat This: 20 Years of The Miseducation of Lauryn Hill (Paperback) 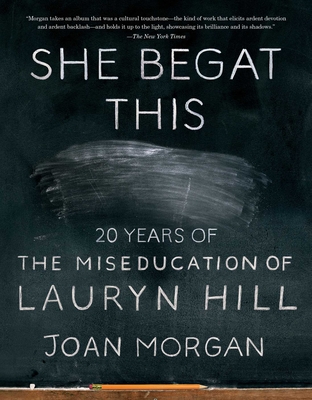 A stirring and eye-opening celebration of the enduring legacy of one of the most acclaimed and influential albums of the 90s—The Miseducation of Lauryn Hill.

Released in 1998, Lauryn Hill’s first solo album is often cited by music critics as one of the most important recordings in modern history. From being chosen by the Library of Congress for the National Recording Registry to being declared the second greatest album by a woman by NPR to influencing subsequent generations of artists such as Beyoncé, Nicki Minaj, and Janelle Monáe, The Miseducation of Lauryn Hill has remained a cultural landmark.

Award-winning feminist author and journalist Joan Morgan delivers an expansive, in-depth, and heartfelt exploration of the seminal album, its enduring place in pop culture, and the pioneering woman behind it. Featuring exclusive interviews and in-depth research, She Begat This is both an indelible portrait of a magical moment when a young, fierce, and determined singer-rapper-songwriter made music history and a crucial work of scholarship, perfect for longtime hip-hop fans and a new generation just discovering this album.

A pioneering hip-hop journalist and award-winning feminist author, Joan Morgan coined the term “hip-hop feminism” in 1999 with the publication of When Chickenheads Come Home to Roost, which is now studied at colleges across the country. She is currently the program director of the Center for Black Visual Culture at NYU.