The Lost City of the Monkey God: A True Story (Hardcover) 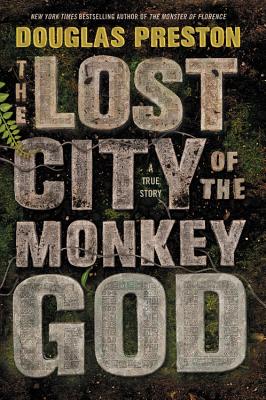 The #1 New York Times and Wall Street Journal bestseller, named one of the best books of the year by The Boston Globe and National Geographic: acclaimed journalist Douglas Preston takes readers on a true adventure deep into the Honduran rainforest in this riveting narrative about the discovery of a lost civilization -- culminating in a stunning medical mystery.
Since the days of conquistador Hernán Cortés, rumors have circulated about a lost city of immense wealth hidden somewhere in the Honduran interior, called the White City or the Lost City of the Monkey God. Indigenous tribes speak of ancestors who fled there to escape the Spanish invaders, and they warn that anyone who enters this sacred city will fall ill and die. In 1940, swashbuckling journalist Theodore Morde returned from the rainforest with hundreds of artifacts and an electrifying story of having found the Lost City of the Monkey God-but then committed suicide without revealing its location.


Three quarters of a century later, bestselling author Doug Preston joined a team of scientists on a groundbreaking new quest. In 2012 he climbed aboard a rickety, single-engine plane carrying the machine that would change everything: lidar, a highly advanced, classified technology that could map the terrain under the densest rainforest canopy. In an unexplored valley ringed by steep mountains, that flight revealed the unmistakable image of a sprawling metropolis, tantalizing evidence of not just an undiscovered city but an enigmatic, lost civilization.


Venturing into this raw, treacherous, but breathtakingly beautiful wilderness to confirm the discovery, Preston and the team battled torrential rains, quickmud, disease-carrying insects, jaguars, and deadly snakes. But it wasn't until they returned that tragedy struck: Preston and others found they had contracted in the ruins a horrifying, sometimes lethal-and incurable-disease.


Suspenseful and shocking, filled with colorful history, hair-raising adventure, and dramatic twists of fortune, THE LOST CITY OF THE MONKEY GOD is the absolutely true, eyewitness account of one of the great discoveries of the twenty-first century.

DOUGLAS PRESTON worked as a writer and editor for the American Museum of Natural History and taught writing at Princeton University. He has written for The New Yorker, Natural History, National Geographic, Harper's, Smithsonian, and The Atlantic. The author of several acclaimed nonfiction books--including the bestseller The Monster of Florence--Preston is also the co-author with Lincoln Child of the bestselling series of novels featuring FBI agent Pendergast.

"Preston builds a compelling case for the scientific significance of what the expedition unearthed....The year may still be young, but I would wager a small fortune that Douglas Preston has already written the best snake-decapitation scene of 2017....The book's most affecting moments [center] on the otherworldly nature of the jungle itself....Memoirs of jungle adventures too often devolve into lurid catalogs of hardships [but] Preston proves too thoughtful an observer and too skilled a storyteller to settle for churning out danger porn. He has instead created something nuanced and sublime: a warm and geeky paean to the revelatory power of archaeology....Few other writers possess such heartfelt appreciation for the ways in which artifacts can yield the stories of who we are."—The New York Times Book Review

"A well-documented and engaging read...The author's narrative is rife with jungle derring-do and the myriad dangers of the chase."—USA Today

"Deadly snakes, flesh-eating parasites, and some of the most forbidding jungle terrain on earth were not enough to deter Douglas Preston from a great story."—The Boston Globe

"This modern-day archeological adventure and medical mystery reads as rapidly as a well-paced novel, but is a heart-pounding true story."—Shelf Awareness, Starred Review

"A captivating real-life adventure tale... Preston deftly explains the science behind this work and makes it exciting."—Science News

"Be prepared to turn the pages furiously as the heart of every adventurer is opened wide by the thrilling journey outlined in THE LOST CITY OF THE MONKEY GOD."—The Bookreporter

"A swift and often hair-raising account... Preston pushes "The Lost City of the Monkey God" well beyond the standard adventure narrative."—The Chicago Tribune

"Packed with the power of realism and history unfolding."—The Star Ledger

"This nonfiction thriller about plunging into the interior of the Honduran jungle is actually true and a perfect read for armchair travelers or would-be adventurers who bemoan the fact that there's nothing left to discover...Douglas Preston's true-life tale includes everything from the latest technology to ancient curses to scientific backbiting and a mysterious illness that came out of the jungle and is headed your way."—The Huffington Post

"Let author Douglas Preston give testimony to the old adage: Truth is stranger than fiction...The Lost City of the Monkey God is more than just an adventure story. It examines such modern issues as the ethics of archeological expeditions, man's destruction of the rainforest and the incessant creep of technology and its effects on indigenous peoples. Readers will find themselves both shocked and captivated by this account of mysteries old and new."—Bookpage

"The Lost City of the Monkey God is a superior example of narrative nonfiction, an exciting, immersive tale of modern science and ancient mythology. Preston captures the complexity of his subject without bogging down in the details, presenting scenes with clarity, purposefulness and wit. It's a great story for a snowy day, an action-packed journey into a hot zone of scientific intrigue."—The Portland Press Herald

"A story that moves from thrilling to sobering, fascinating to downright scary--trademark Preston, in other words, and another winner."—Kirkus, starred review

"Replete with informative archaeology lessons and colorful anecdotes about the challenges Elkins' crew faced during the expedition, including torrential rains and encounters with deadly snakes, Preston's uncommon travelogue is as captivating as any of his more fanciful fictional thrillers."—Booklist

"Best-selling journalist and thriller author Douglas Preston stars in his own true-story page-turner about the discovery of a lost city deep in the Honduran jungle...giving readers an Indiana Jones style adventure that's history, not Hollywood."—Virtuoso Life

"For anyone who dreams of lost times and places--and who doesn't?--this is the book. Revelatory, chilling, creepy, and alive with deadly snakes and insects bearing incurable disease, it's high adventure at its best, and all true."—Erik Larson, New York Times bestselling author of Dead Wake and The Devil in the White City

"What reader could resist a new book by Douglas Preston called THE LOST CITY OF THE MONKEY GOD? Not this reader. Preston's book offers rewards for both the mystery fan and the nonfiction aficionado. THE LOST CITY is addictive-fast-paced and riveting, but it's also important. We mustn't repeat the cataclysmic mistakes of the past. Ironically-as THE LOST CITY illustrates-that's exactly what our short-sighted civilization is doing right now."—James Patterson

"If you're going to explore a lost city-in this case one that vultures, poisonous snakes, sand flies, and mudholes have protected for 500 years-you really only want to do it with Douglas Preston. A tale of bravado, chicanery, and impossible dreams, arresting at every turn, no less so in its unexpected, pulse-racing coda."—Stacy Schiff, Pulitzer Prize-winning author of The Witches: Salem, 1692, and Cleopatra: A Life

"Douglas Preston, at great risk to his own life, has produced a thrilling and powerful adventure story. Not only does he leave the reader fitfully turning the pages, he sheds an important light on what the Americas looked like before the arrival of Christopher Columbus and on the fragility of our own civilization."—David Grann, New York Times bestselling author of The Lost City of Z

"Douglas Preston is one of the most adventurous figures in American letters today. Inured to personal danger, braving venomous snakes and lethal pathogens, he somehow gets it all--the science, the history, the intrigues, the obsessive characters, the electric moment of discovery, and the haunted cries of a once-powerful civilization. Preston's marvelous story is made all the more potent by the astonishing fact that, from beginning to end, it happens to be true."—Hampton Sides, New York Times bestselling author of In the Kingdom of Ice

"A great true adventure, filled with danger, close calls, better-than-Hollywood characters, and a lost world that reaches through time and into everyone's future. One of the best nonfiction books I've read."—Robert Kurson, New York Times bestselling author of Shadow Divers and Pirate Hunters

"The Lost City of the Monkey God is a throwback to the golden age of adventure archaeology, the thrilling true story of a group of explorers penetrating one of the toughest jungles on earth in search of a lost city...and finding it. Preston is a terrific writer of both non-fiction books and bestselling novels, and makes you feel the dark heart of this lost Honduran wilderness."—John Sandford, Pulitzer Prize-winning journalist and author of the #1 New York Times bestselling Prey series of novels

"One of the best reads so far this year."—The Sacramento Bee

A Best Book of 2017 from the Boston Globe

One of the 12 Best Books of the Year fromNational Geographic

A Favorite Science Book of 2017 from Science News