The Fifties: An Underground History (Paperback) 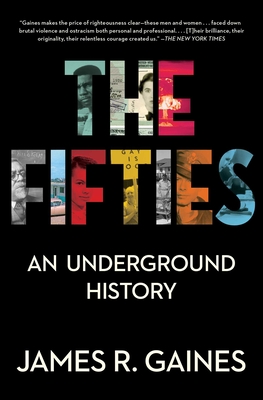 An “exciting and enlightening revisionist history” (Walter Isaacson, #1 New York Times bestselling author) that upends the myth of the 1950s as a decade of conformity and celebrates a few solitary, brave, and stubborn individuals who pioneered the radical gay rights, feminist, civil rights, and environmental movements, from historian James R. Gaines.

An “enchanting, beautifully written book about heroes and the dark times to which they refused to surrender” (Todd Gitlin, bestselling author of The Sixties). In a series of character portraits, The Fifties invokes the accidental radicals—people motivated not by politics but by their own most intimate conflicts—who sparked movements for change in their time and our own. Among many others, we meet legal pathfinder Pauli Murray, who was tortured by both her mixed-race heritage and her “in between” sexuality. Through years of hard work and self-examination, she turned her demons into historic victories. Ruth Bader Ginsburg credited her for the argument that made sex discrimination unconstitutional, but that was only one of her gifts to the 21st-century feminism. We meet Harry Hay, who dreamed of a national gay rights movement as early as the mid-1940s, a time when the US, Soviet Union, and Nazi Germany viewed gay people as subversives and mentally ill. And in perhaps the book’s unlikeliest pairing, we hear the prophetic voices of Silent Spring’s Rachel Carson and MIT’s preeminent mathematician, Norbert Wiener, who from their very different perspectives—she is in the living world, he in the theoretical one—converged on the then-heretical idea that our mastery over the natural world carried the potential for disaster. Their legacy is the environmental movement.

The Fifties is an “inspiration…[and] a reminder of the hard work and personal sacrifice that went into fighting for the constitutional rights of gay people, Blacks, and women, as well as for environmental protection” (The Washington Post). The book carries the powerful message that change begins not in mass movements and new legislation but in the lives of the decentered, often lonely individuals, who learn to fight for change in a daily struggle with themselves.

James R. Gaines is the former managing editor of Time and the author of several books, including Evening in the Palace of Reason, a study of Johann Sebastian Bach and the early Enlightenment, and For Liberty and Glory: Washington, Lafayette, and Their Revolutions. He lives in New York and Los Angeles.

"Values we take for granted can seem obvious when we encounter them in historical figures, but Gaines makes the price of righteousness clear—these men and women...faced down brutal violence and ostracism both personal and professional....[T]heir brilliance, their originality, their relentless courage created us.” —The New York Times

"An inspiration... A reminder of the hard work and personal sacrifice that went into fighting for the constitutional rights of gay people, Blacks and women as well as for environmental protections." —The Washington Post

"Revelatory... By attending to the experience of historical actors as they move through the world, he builds an account that is full of the complexity of lived experience. The result may not make for a simple read, but it is an infinitely rich one." —The Guardian

"Describes the courage of his heroes and the price they paid for standing up and speaking out in hostile environments...  Progress 'is always a figment until it is not,' Gaines reminds us, and those who help 'make it happen, make history.'" — Star Tribune

"An up close and personal look at the lives and careers of activists who recognized various societal problems and fought them... All had one thing in common: the courage to stand out from the conformist crowd and address issues that had been swept under the table." — The Daily Beast

"Gaines has written an exciting and enlightening revisionist history of the 1950s showing how the brave pioneers of that supposedly sleepy decade launched the movements of the 1960s that continue to this day. Here are the inspiring tales of the unsung heroes who sowed the seeds of the gay rights, civil rights, feminist, and environmental movements. They were the true rebels, and their bravery shows us how real social change occurs." - Walter Isaacson, #1 New York Times bestselling author of The Code Breaker

"The Fifties is an enchanting, beautifully written book about heroes and the dark times to which they refused to surrender. We speak much too casually of heroes. These women and men of the ‘50s and thereafter, in all their complexity, deeply deserve the word, as Gaines's moving treatment makes clear." —Todd Gitlin, bestselling author of The Sixties: Years of Hope, Days of Rage; Professor of Journalism and Sociology and Chair, Ph. D. Program in Communications, Columbia University

“Compassionate and insightful…Gaines provides essential historical context and vividly captures the resilience of these and other 'authentic rebels' who battled the FBI, McCarthyism, the medical industry, and the Ku Klux Klan 'in a time infamous for rewarding conformity and suppressing dissent.' This revisionist history is packed with insights." — Publishers Weekly

“An engrossing deep dive into the personal histories of important figures...This work by Gaines follows in the footsteps of David Halberstam’s 1993 book of the same title and will be enjoyed by readers seeking solid historical research that is also an informative read. Recommended.”—Library Journal

“[Gaines] has taken valiant steps to… painstakingly and persuasively show how the 10 individuals he profiles fought ‘through the thicket of postwar repressions’ to help build what would later come to be known as the gay rights, feminist, civil rights and environmental movements…An intrepid corrective.”—Shelf Awareness