De la Pole, Father and Son: The Duke, The Earl and the Struggle for Power (Hardcover) 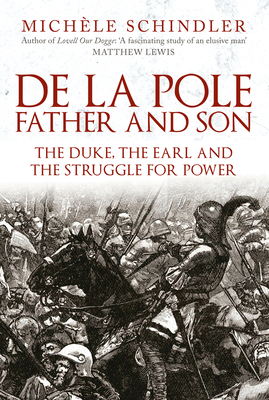 His youth was overshadowed by the political fall and subsequent murder of his father in 1450, who had been a favorite of King Henry VI, but was increasingly distrusted by the rest of the nobility. His second marriage, to Elizabeth of York, the sixth child and third daughter of Richard Plantagenet, 3rd Duke of York, made him the brother-in-law of two kings, Edward IV and Richard III. The eldest of his eleven children from the marriage, also John, would eventually be named heir to Richard III in 1484 and die in battle in the Yorkist cause. The father would outlive the son.

Part of the fascination in this dual biography is the relationship between these two powerful figures and their differing involvement in the Wars of the Roses. Did John Senior approve of John Junior’s rebellion and close involvement in the Simnel conspiracy? How much did he support his son in his claim to the throne?

After his son’s death he had to show allegiance to the new Tudor king. The differences between the political decisions of the Duke of Suffolk and the Earl of Lincoln are profound, despite the ties of blood.

By focusing on these two overlapping lives, Michèle Schindler provides a new perspective on the tumultuous events of 15th-century England and the birth of the modern nation-state.

Michèle Schindler studied at Johann Wolfgang Goethe-Universität in Frankfurt am Main, Germany, reading English Studies and history with a focus on mediaeval studies. At the same time she worked as a language teacher, teaching English and German as a second language. In addition to English and German, she is fluent in French, and reads Latin. She is the author of Lovell Our Dogge and Alice Chaucer for Amberley.