That's Betty!: The Story of Betty White (Who Did It First?) (Hardcover) 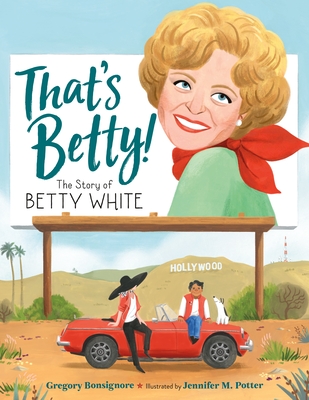 An innovative and joyful picture book biography that celebrates the life and achievements of TV legend, pioneer, and activist Betty White.

Betty White is a legend and icon (but you already knew that).

In her eighty-year career, she starred on some of the most beloved shows of all time (like The Mary Tyler Moore Show and The Golden Girls, along with dozens more) and received multiple Emmy, American Comedy, and Screen Actors Guild Awards, as well as a Grammy and People’s Choice Award, not to mention a star on the Hollywood Walk of Fame!

More than creating some of the most memorable roles in history, Betty helped to make the world a better and more equal place. Early in her career, at a time when women had little power in Hollywood, she starred in, directed, and produced her own shows, creating opportunities for other women and for people from marginalized groups. She campaigned to end bullying and has stood up for the LGBTQIA+ community. And she devoted much of her life advocating for the fair treatment of animals.

This innovative picture book biography follows a young boy who is doing a class presentation about Betty White…with a little help from Betty herself! Whimsical yet fact-filled, That’s Betty! tells the story of a life well-lived while celebrating Betty’s many fans.

A Who Did It First? Book

Gregory Bonsignore is an award-winning playwright, director, actor, comedian, and writer. His work has been featured on and produced for television and the stage. He grew up in Houston, has a degree in Storytelling from NYU, trained at the BBC in London, and is a graduate of the BMI Lehman Engel Musical Theatre Workshop. That's Betty! is his debut picture book.

Jennifer M. Potter is an illustrator who lives in San Francisco. When she's not busy drawing, she volunteers at the local animal shelter. She lives with her husband, several attention-starved plants, and a concerning number of watercolor palettes. Her illustrated books include By the Light of the Moon (Zoe Tucker), Voices of Justice (George Ella Lyon), and A Songbird Dreams of Singing (Kate Hosford).

"Cleverly written from a child’s perspective, this biography will have readers loving Betty White more and more with each turn of the page. . .[T]his is a must-have for all library shelves." —School Library Journal, Starred Review

"In this awed tribute, a young fan assigned to do a class presentation on a “trailblazing woman” braves the skepticism of their teacher and their dads to gain. . .a high-spots overview of White’s multi-decade career. Readers, too, will come away wowed." —Booklist, Starred Review

"A playful tour of Betty White’s life. . . [T]his LGBTQ+–friendly selection offers a mirror to children intent on being themselves and focusing on their unique interests, gender-typical or not. Lively illustrations feature a diverse cast. A well-intentioned biographical selection about Betty White that is consciously inclusive and diverse." —Kirkus Reviews

"Readers unfamiliar with [Betty] White will find something to admire in her pioneering gumption and willingness to stand up for what’s right. Bonsignore handles all the details of White’s long life with elan. . .in this irrepressible picture book debut." —Publishers Weekly