I Love You, Michael Collins (Paperback) 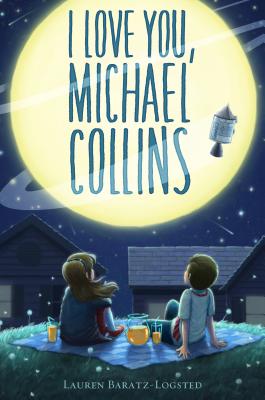 A funny and heartwarming middle-grade historical fiction novel about a girl who writes letters to her favorite astronaut as America prepares for the moon landing.

It’s 1969 and the country is gearing up for what looks to be the most exciting moment in U.S. history: men landing on the moon. Ten-year-old Mamie’s class is given an assignment to write letters to the astronauts. All the girls write to Neil Armstrong ("So cute!") and all the boys write to Buzz Aldrin ("So cool!"). Only Mamie writes to Michael Collins, the astronaut who will come so close but never achieve everyone else's dream of walking on the moon, because he is the one who must stay out in space with the ship.

After school ends, Mamie keeps writing to Michael Collins, taking comfort in telling someone about what's going on with her family as, one by one, they leave the house thinking that someone else is taking care of her—until she is all alone except for her cat and her best friend, Buster. And as the date of the launch nears, Mamie can't help but wonder: Does no one stay with the ship anymore?

With I Love You, Michael Collins, Lauren Baratz-Logsted has created a heartwarming story about family and being true to yourself.

“Baratz-Logsted weaves in just enough history to root Mamie’s story in her time, a moment when a nation came together and felt proud of human possibilities. . . . Readers will be charmed by Mamie’s story of hope in a difficult moment in American history.” —Kirkus Reviews

LAUREN BARATZ-LOGSTED is the author of more than a dozen books for adults and young readers, including The Twin's Daughter, Crazy Beautiful, and the Sisters 8 series, which she cowrites with her husband and daughter.

“Baratz-Logsted weaves in just enough history to root Mamie’s story in her time, a moment when a nation came together and felt proud of human possibilities. . . . Readers will be charmed by Mamie’s story of hope in a difficult moment in American history.” —Kirkus Reviews

“Against the highly gendered backdrop of 1969 (all the girls want to marry astronauts, while the boys want to become them), Mamie’s friendship with her neighbor Buster is particularly moving. Mamie and Buster share a fixation on the space race, and Buster remains loyal and constant even as Mamie’s parents’ conflict erupts. Mamie’s isolation at home echoes Collins’s solitude in orbit a bit too neatly, but her bravery and loyalty are memorable.” —Publishers Weekly