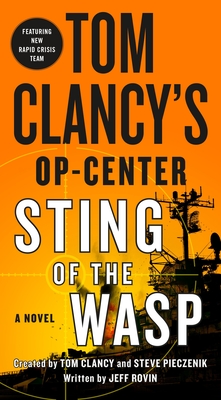 After an intelligence failure at Op-Center results in a major terrorist attack, director Chase Williams radically transforms the agency into a groundbreaking mobile strike force in Tom Clancy's Op-Center: Sting of the Wasp.

It’s a beautiful day in Manhattan as excited tourists board the floating Air & Space Museum on the USS Intrepid—until a horrible explosion rips across the flight deck, showering the body parts of innocent people everywhere. The perpetrator is a Middle Eastern mastermind whose previous terrorism plot was foiled at the last minute by Op-Center.

Back in Washington, Chase Williams has been put in charge of a brand-new, top-secret organization known only as Black Wasp. Its members, all chosen for their unique set of specialized black-ops skills—martial arts expert Lieutenant Grace Lee, sharpshooter Lance Corporal Jaz Rivette, and JAG attorney and criminologist Major Hamilton Breen—have been assigned to bring the terrorist to justice. But when a terrifying conspiracy involving the creation of a new Islamic State is uncovered, Chase and his team become America’s only line of defense against a ruthless enemy bent on global destruction.

JEFF ROVIN is the author of more than 150 books, fiction and nonfiction, both under his own name, under various pseudonyms, or as a ghostwriter, including numerous New York Times bestsellers and over a dozen of the original Tom Clancy’s Op-Center novels.

"Rovin's thrilling fifth entry...all the elements seamlessly click into place. Clancy would be proud."—Publishers Weekly for For Honor

“Thriller addicts like me devoured every Tom Clancy's Op-Center tale. Now they are back, intricately plotted, with wonderfully evil villains and enough realistic military action and suspense to ruin a couple of night's sleep. Highly recommended.” —Stephen Coonts, bestselling author for Out of the Ashes