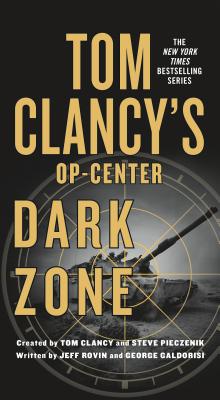 In Dark Zone, a race-to-the-finish thriller in the New York Times bestselling Tom Clancy's Op-Center series, the brutal murder of an undercover agent reveals a plot to incite a full-fledged world war. . .

Former U.S. Ambassador to Ukraine Douglas Flannery meets with an old friend and former spy in New York City. She is seeking his help to thwart a Russian plan to overrun her native Ukraine, but those for whom she is working propose an infinitely more dangerous scheme—one that could draw in NATO forces and possibly ignite World War III. Moments later, as she jogs along the East River, her throat is slashed.

Within hours, Op-Center learns of the killing and alarm bells go off. Director Chase Williams and his team have been following events as Ukraine, her NATO allies, and Russia rapidly deploy forces in a dangerous game of brinksmanship. But the secret that Flannery now possesses threatens to take a looming battle to awhole new and very lethal level. Using cutting-edge techniques of cyber warfare and spycraft, Op-Center must respond to the rapidly unfolding crisis before the U.S. is forced to take sides in a conflict that could change history.

Jeff Rovin has written dozens of novels, most notably Tom Clancy's Op-Center and its sequels, several of which have appeared on the New York Times bestseller list. He's written nonfiction books about myths, religion, and the Bible and brings that research to bear in Conversations With the Devil. Rovin lives in the New York area.

GEORGE GALDORISI is a career naval aviator. His Navy career included four command tours and five years as a carrier strike group chief of staff. He has written several books, including (with Dick Couch), the New York Times best seller, Tom Clancy Presents: Act of Valor; The Kissing Sailor, which proved the identity of the two principals in Alfred Eisenstaedt's famous photograph; and over 200 articles in professional journals and other media. He is the Director of the Corporate Strategy Group at the Navy's C4ISR Center of Excellence in San Diego, California. He and his wife Becky live in Coronado, California.

“Gripping action . . . a Navy SEAL, goes on a one-man mission to rescue his father. . . . a satisfying and entertaining read and a worthy addition to the revived series.” —Defense Media Network
on Scorched Earth

“A top-notch military thriller, combining politics, suspense, and action. Couch and Galdorisi continue to make the Clancy brand shine.” —Booklist on Into the Fire

“With intricate plotting, plenty of action, and characters – even villains – that are more than cardboard cutouts, Tom Clancy’s OpCenter: Into the Fire is definitely a book that will leave you sleep-deprived.” —Defense Media Network

“The U.S intelligence agencies have spent billions since9/11 learning how to ‘connect the dots.’ But what if there are only one or two dots? . . . A frightening and exciting tale about a very new, but also a very old threat.” —Larry Bond on Out of the Ashes

“Thriller addicts like me devoured every Tom Clancy's Op-Center tale. Now they are back, intricately plotted, with wonderfully evil villains and enough realistic military action and suspense to ruin a couple of night's sleep. Highly recommended.” —Stephen Coonts on Out of the Ashes