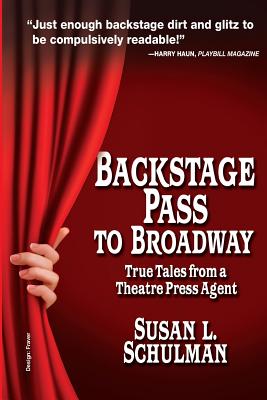 True and Dishy Tales from a Theatre Press Agent

Theatre press agent Susan L. Schulman has worked with some of Broadway's most talented and creative people — sometimes behaving badly and often with astonishing grace — as they struggled to create theatre magic.  In this entertaining, dishy book, she turns the spotlight on what goes on behind the show curtain, sharing true tales of her life in the theatre.

A New York City 'theatre kid' who waited outside stage doors, not for autographs, but to tell actors how they had enhanced her life, Schulman began her career as the Golden Age of Broadway seemed to be ending.  Yet she handled the publicity for such Broadway shows as Johnny Mercer's DREAM, Bob Fosse's DANCIN', Larry Gelbart's SLY FOX, Rodgers & Hammerstein's STATE FAIR, APPLAUSE, DEATH OF A SALESMAN, A STREETCAR NAMED DESIRE, SCAPINO, DEATH AND THE MAIDEN and REQUIEM FOR A HEAVYWEIGHT.

Schulman has survived some spectacular theatrical train wrecks including the play that killed Zero Mostel, legendary producer David Merrick's last hurrah, and a fading film diva who undermined her own return to Broadway.  Schulman also explains what a theatrical press agent does, how she does it, and how theatre promotion has changed since she began.

"Take this backstage tour from an insider who lived it.  Like Susan, this book is smart and funny." — TV icon HENRY WINKLER

"Susan L. Schulman is one of Broadway's best press agents. Everyone knows that.  Now, with this book, we can see why her publicity and marketing ideas have flled theaters. Her shockingly honest, funny, and insightful reporting of how this amazing industry really works makes this a captivating, easy read. From her unique vantage point we get the down and dirty, and it makes us admire her even more."  — TV, flm and stage star JOHN DAVIDSON