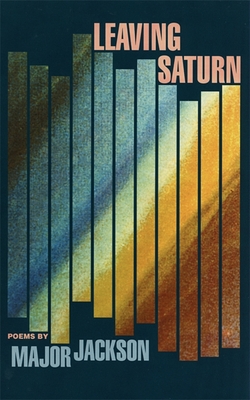 Leaving Saturn, chosen by Al Young as the winner of the Cave Canem Poetry Prize, is an ambitious and honest collection. Major Jackson, through both formal and free verse poems, renders visible the spirit of resilience, courage, and creativity he witnessed among his family, neighbors, and friends while growing up in Philadelphia. His poems hauntingly reflect urban decay and violence, yet at the same time they rejoice in the sustaining power of music and the potency of community. Jackson also honors artists who have served as models of resistance and maintained their own faith in the belief of the imagination to alter lives. The title poem, a dramatic monologue in the voice of the American jazz composer and bandleader Sun Ra, details such a humane program and serves as an admirable tribute to the tradition of African American art. Throughout, Jackson unflinchingly portrays our most devastated landscapes, yet with a vividness and compassion that expose the depth of his imaginative powers.

Major Jackson's debut volume of poems, "Leaving Saturn," selected by poet and novelist Al Young to receive the 2000 Cave Canem Poetry Prize for the best first book by an African American poet, was nominated for a 2002 National Book Critics Circle Award and has received critical attention in the "Boston Globe," "Christian Science Monitor," "Parnassus," "Philadelphia Inquirer," and on National Public Radio's "All Things Considered." His poems have appeared in the "American Poetry Review," "Boulevard," "Callaloo," "Grand Street," "Post Road," the "New Yorker," among other literary journals. Formerly the Literary Arts Curator of the Painted Bride Art Center in Philadelphia, he is the recipient of fellowships and awards from Bread Loaf Writers' Conference, Pew Fellowship in the Arts, Fine Arts Work Center in Provincetown, as well as a commission from The Chamber Orchestra of Philadelphia. In 2003, he received the prestigious Whiting Writers' Award. He has given readings around the country and participated in many festivals including Geraldine R. Dodge Poetry Festival, Poetry Society of America's Festival of New American Poets, and the "New Yorker" Festival in Bryant Park, New York City. He is a graduate of Temple University and University of Oregon's Creative Writing Program. Major Jackson is an associate professor of English at University of Vermont, a faculty member of the MFA Creative Writing Program at Queens University of Charlotte in North Carolina, and a former Witter Bynner Fellow for the Library of Congress. He lives in South Burlington, Vermont. His second book of poems "Hoops" is forthcoming from W.W. Norton.

"From Sun Ra to the conundrum of adolescent sexuality, from barbershop culture to basketball and dance as rites of passage, Leaving Saturn is largely about returning: to tradition, to a psychological landscape both American and African American, and to a recognition of that suffering without which 'how else/do we know we are here?' An ambitious debut, for which Major Jackson has coined an idiom and music all his own."--Carl Phillips

"One of the gifts of the finest poets is to understand that one's personal voice is intertwined with the voices of other poets and other people, both dead and living, and yet to speak and sound like oneself, neither pretentious nor dumbed down. Major Jackson has that gift. Prophetic scat singer, apocalyptic raconteur, he makes poems that swerve impossibly and yet authoritatively from the ordinary to the miraculous and beyond but always keep their cool. Rich in reference and thick with all he has experienced on his own pulses, Major Jackson's poetry gathers, lifts, and loads, but never collapses. It takes on a massive load, but carries it forward."--T. R. Hummer, author of The Muse in the Machine: Essays on Poetry and the Anatomy of the Body Politic

"With a changeable, questing voice, unexpected shifts in attention and tone, Major Jackson makes poems that rumble and rock. These poems find themselves at home in the mind of Sun Ra or on a Cape Cod beach, in a City Center Disco or the projects of North Philadelphia. Read 'Euphoria,' 'How To Listen,' 'Some Kind of Crazy' and get a jolt of this stuff. Become one of the 'community of believers.'"--Dorianne Laux

"Jackson is in step, but he's also out there on the sidelines watching, with a keen eye for the tender moment, a rage at unfairness, a clever perception of vision where others might see only craziness. With such an auspicious beginning, what a future lies ahead of him."--New Orleans Times-Picayune

"In this winning debut collection, Major Jackson begins as a poet of the Philadelphia projects, then projects himself into the wider arena of American Literature. Leaving Saturn marks the arrival of a poet who could be the Langston Hughes of North Philadelphia or the next Robert Hayden whose, 'Tattooed Man' yearns, 'Oh to break through,/ to free myself. . . .' Major Jackson has the talent to free himself to become whatever kind of poet he wants. . . . He will always have Philadelphia and his black roots as a source of 'tropes,' which he calls 'brutal, / relentless, miraculous. . .'—just like his poetry."--George Held, Philadelphia Inquirer

"Ultimately, Leaving Saturn is an homage to the inner-city ugly duckling, which, through Jackson's humanistic powers, is transcended into a swan."--David Mills, Boston Globe

"These assemblies of word, phrase, and line offer collages out of Romare Bearden, and their subtle meters have a musicality that conjures the back beats of an adolescence and adulthood in a Philadelphia stretching immeasurable latitudes away from the Main Line."--Reamy Jansen, Christian Science Monitor