Talking #browntv: Latinas and Latinos on the Screen (Paperback) 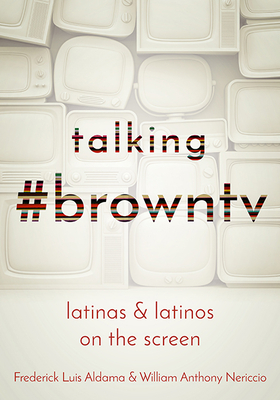 Like two friends sitting down in front of the television together, in Talking #browntv, Frederick Luis Aldama and William Anthony Nericcio dialogue about the representations of Latina/os in American television and film from the twentieth century to the present day. One part conversation, one part critique, one part visual cultural studies, and one part rant against the culture industry profiting off warped caricatures of Latina/o subjectivities, Aldama and Nericcio analyze the ways in which Latinx performers have been mediated—with varying degrees of complexity—on the American screen. A comprehensive review of the history of Mexicans, Mexican Americans, Hispanics, Chicana/os, Latina/os, and Latinx performers in television and film, Talking #browntv boldly interrogates one of the largest paradoxes in the history of American television: Why are there so few Latina/os on television, and why, when they do appear, are they so often narcos, maids, strumpets, tarts, flakes, and losers?

From the subversive critiques embedded in well-loved children’s characters like Speedy Gonzalez to the perpetuation of racial stereotypes in modern-era pornography, from Eva Longoria as ethnic mannequin to J-Lo flipping the sexy Latina music video on its head in “I Luh Ya Papi,” and with more than 150 full-color images, Aldama and Nericcio seek to expose the underlying causes as to why Latina/os constitute only 2 percent of mainstream cultural production when they’re the majority minority in the US. In a moment when anti-Mexican and anti-immigrant rhetoric oozes from TV sets and medias platform, Talking #browntv emerges as a bold antidote, an eloquent rejoinder, and a thoughtful meditation on Latina/os on the American screen and in America today.

Frederick Luis Aldama is Arts and Humanities Distinguished Professor and Director of LASER at The Ohio State University and the author, coauthor, or editor of more than thirty books, including Tales from La Vida: A Latinx Comics Anthology (Mad Creek Books, 2018).
William Anthony Nericcio is Professor and Director of MALAS at San Diego State University. He is the author of Tex[t]-Mex: Seductive Hallucinations of the “Mexican” in America.

“[A] deeply felt, wide-ranging, well-informed conversation… Leaving few stones unturned, the authors cover art, music, history, politics, sociology, sexuality, and ethnology. The volume is strategically illustrated, with images from many media forms and some graphic works by Nericcio.… This will be a good supplementary resource for those studying diversity in the media (both traditional and social). Summing up: Recommended.”—D. A. Schmitt, CHOICE


Talking #browntv wakes the world to the urgency for televisual media to willfully recreate the complexity and diversity of our Latinx communities.” —Aitana Vargas, award-winning journalist for the LA Times, BBC, and CNN Expansión

“My Dinner with Andre, except with two sassy Solons waxing wise and wacky on Slowpoke Rodriguez, Superman as Mexico’s savior, and other highs and lows of Mexican muses in American pop culture. Nomás falta the Tapatio on this intellectual popcorn!” —Gustavo Arellano, author of Taco USA: How Mexican Food Conquered America