The Words We Live By: Your Annotated Guide to the Constitution (Paperback) 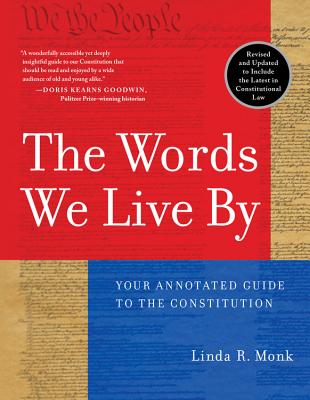 The Words We Live By takes an entertaining and informative look at America's most important historical document, now with discussions on new rulings on hot button issues such as immigration, gay marriage, gun control, and affirmative action.

In The Words We Live By, Linda Monk probes the idea that the Constitution may seem to offer cut-and-dried answers to questions regarding personal rights, but the interpretations of this hallowed document are nearly infinite. For example, in the debate over gun control, does "the right of the people to bear arms" as stated in the Second Amendment pertain to individual citizens or regulated militias? What do scholars say? Should the Internet be regulated and censored, or does this impinge on the freedom of speech as defined in the First Amendment? These and other issues vary depending on the interpretation of the Constitution.

Through entertaining and informative annotations, The Words We Live By offers a new way of looking at the Constitution. Its pages reflect a critical, respectful and appreciative look at one of history's greatest documents. The Words We Live By is filled with a rich and engaging historical perspective along with enough surprises and fascinating facts and illustrations to prove that your Constitution is a living -- and entertaining -- document.

Updated now for the first time, The Words We Live By continues to take an entertaining and informative look at America's most important historical document, now with discussions on new rulings on hot button issues such as immigration, gay marriage, and affirmative action.

Linda R. Monk, J.D., is a constitutional scholar, journalist, and nationally award-winning author. A graduate of Harvard Law School, she twice received the American Bar Association's Silver Gavel Award, its highest honor for public education about the law. Her books include The Words We Live By: Your Annotated Guide to the Constitution, Ordinary Americans: U.S. History Through the Eyes of Everyday People, and The Bill of Rights: A User's Guide. For more than twenty-five years, Ms. Monk has written commentary for newspapers nationwide-including the New York Times, Washington Post, Los Angeles Times, and Chicago Tribune, and Huffington Post.

"A wonderfully accessible yet deeply insightful guide to our Constitution that should be read and enjoyed by a wide audience of old and young alike."—Doris Kearns Goodwin, Pulitzer Prize-winning historian

"I have never before seen so clear an explanation of what's in the Constitution and why. Monk has provided a service to the nation that should earn her a Presidential Medal of Freedom."—Nat Hentoff, Pulitzer Prize finalist and Senior Fellow, Cato Institute

"A book for 'We the People' of all ages--wonderfully simple but never simplistic, brimming with profound and provocative ideas."—Akhil Reed Amar, Sterling Professor of Law and Political Science, Yale University

"Finally, a book that presents all sides of constitutional issues."—Linda Chavez, Chairman of the Center for Equal Opportunity and FOX News Channel contributor

"Linda Monk takes us on a lively and learned exploration of the document that underlies not only how we Americans govern ourselves but how we make sense of the world. Anyone reading The Words We Live By will finish it with a greater understanding of the Constitution and a new respect for how it has secured freedom and self-government for the last two centuries."—Steve Chapman, syndicated columnist, Chicago Tribune

"[Linda Monk] captures just the right blend of history and current events to help us understand why the Constitution is America's cornerstone of freedom."—Charles Overby, Pulitzer Prize-winning newspaper editor and Chairman of the Overby Center of Southern Journalism and Politics

"When I covered federal courts in Washington at the foot of Capitol Hill, I read The Words We Live By all the time. When I stopped covering the courts, I still read it all the time. Smart, informed, witty--just the way everyone wants to sound when discussing the Constitution."—Neely Tucker, staff writer, Washington Post

"The U.S. Constitution gets a comprehensive overview in this engaging blend of history and commentary. Monk . . . traces the history and consequences of each part of this vital document in a line-by-line analysis of the original seven articles and the 27 amendments. She also gives even-handed but lively accounts of the debates over such Constitutional controversies as the right to bear arms, the right to privacy, church-state separation, and capital punishment."—Citation for Chief of Staff of the Air Force 2012 Reading List

"This volume ought to be required reading for every American young and old."—Governor William Winter, Chairman Emeritus of the Winter Institute for Racial Reconciliation