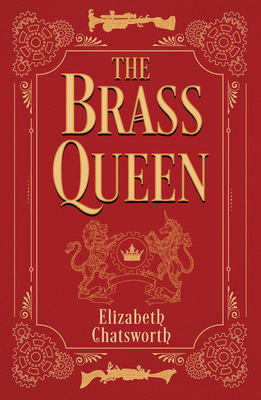 She knows a liar when she sees one. He knows a fraud when he meets one.

In a steam-powered world, Miss Constance Haltwhistle is the last in a line of blue-blooded rogues. Selling firearms under her alias, the “Brass Queen,” she has kept her baronial estate’s coffers full. But when US spy J. F. Trusdale saves her from assassins, she’s pulled into a search for a scientist with an invisibility serum. As royal foes create an invisible army to start a global war, Constance and Trusdale must learn to trust each other. If they don’t, the world as they know it will disappear before their eyes.

If you like the Parasol Protectorate or the Invisible Library series, you’ll love this gaslamp fantasy—a rambunctious romantic romp that will have you both laughing out loud and wishing you owned all of Miss Haltwhistle's armaments.

Elizabeth Chatsworth is a British author and actor based in Connecticut. She loves to write of rogues, rebels, and renegades across time and space.

Elizabeth is a Writers Of The Future winner, a Golden Heart® finalist, a Pitch Wars alumna, and a member of the SFWA. She’s the author of THE BRASS QUEEN (January 2021), an award-winning fantasy set in an alternate Victorian age.

When she’s not writing, Elizabeth works as a voice-over actor. There’s a rumor she possesses the world’s best scone recipe. Contact her at www.elizabethchatsworth.com to see if it’s true!