To Be or Not To Be: A Chooseable-Path Adventure (Paperback) 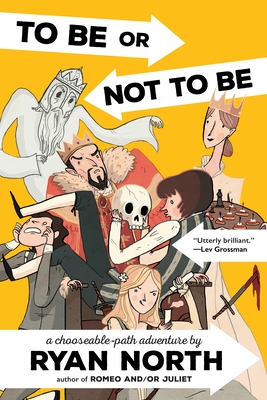 When Shakespeare wrote Hamlet he gave the world just one possible storyline, drawn from a constellation of billions of alternate narratives.  And now you can correct that horrible mistake! Play as Hamlet and avenge your father's death—with ruthless efficiency this time. Play as Ophelia and change the world with your scientific brilliance. Play as Hamlet's father and die on the first page, then investigate your own murder… as a ghost! Featuring over 100 different endings, each illustrated by today's greatest artists, incredible side quests, fun puzzles, and a book-within-a-book instead of a play-within-a-play, To Be or Not To Be offers up new surprises and secrets every time you read it.

You decide this all sounds extremely excellent, and that you will definitely purchase this book right away.  Because as the Bard said: “to be or not to be… that is the adventure.”

...You're almost certain that's how it goes.

To Be or Not To Be originally launched as a record-breaking Kickstarter project. This new, reader-friendly edition features the same text and illustrations as the original version, redesigned to take up half as many pages and weigh a whole pound less.

Ryan North is a New York Times-bestselling author and cartoonist. His other chooseable-path Shakespeare book is called Romeo and/or Juliet, and you should check that one out too. North is known for his online strip Dinosaur Comics, his critically acclaimed work on Marvel's Unbeatable Squirrel Girl, as well as his Eisner-award winning writing for the Adventure Time comic. He lives in Toronto with his wife Jenn and their dog Noam Chompsky, who is a good boy. Yes he is.

“Reference mixed with irreverence—that's what makes To Be or Not to Be so much fun.” —Slate

“An idea that is, by most conventional literary standards, terrible, but pushed so far past terrible that it wraps around like a comet slingshotting around the sun and comes back as utterly brilliant.” —Lev Grossman, Time


Praise for other work by Ryan North:

“Romeo and/or Juliet is written with the finest distilled charm and genuine enthusiasm. Entertaining and extremely satisfying.” —Kate Beaton, author of Hark! A Vagrant and Step Aside, Pops

“Ryan North's The Best of Dinosaur Comics: 2003-2005 A.D. had me howling with laughter and passing the book around to whomever I could lay hands on to point out particularly good strips. Dinosaur Comics is an unlikely gem of a webcomic.” —Cory Doctorow, Boing Boing

"Adventure Time #10 is a spectacular jumping-on point for readers young and old. Even for non-fans, this issue is one of the most captivating comics of the year." —The Onion A.V. Club

"[The Unbeatable Squirrel Girl] was freaking hilarious... it's the closest thing the Marvel universe has to a classic screwball sitcom." —Nerdist

“Machine of Death is a marvelous collection, riddled with intelligence, creative reach, and a frankness that makes the best use of the central gimmick.” —Tasha Robinson, The Onion A.V. Club

“This Is How You Die is a brilliantly addictive book that reads like a series of existential, death-obsessed Twilight Zone episodes. Very highly recommended.” —Seth Grahame-Smith, author of Abraham Lincoln: Vampire Hunter