The End of October: A novel (Paperback) 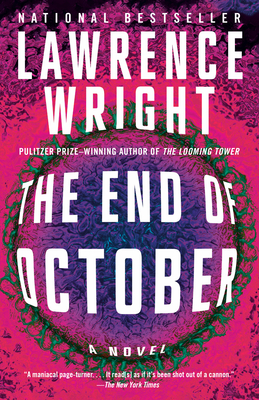 At an internment camp in Indonesia, forty-seven people are pronounced dead with acute hemorrhagic fever. When epidemiologist Henry Parsons travels there on behalf of the World Health Organization to investigate, what he finds will have staggering repercussions. Halfway across the globe, the deputy director of U.S. Homeland Security scrambles to mount a response to the rapidly spreading pandemic leapfrogging around the world, which she believes may be the result of an act of biowarfare. And a rogue experimenter in man-made diseases is preparing his own terrifying solution.

As already-fraying global relations begin to snap, the virus slashes across the United States, dismantling institutions and decimating the population. With his own wife and children facing diminishing odds of survival, Henry travels from Indonesia to Saudi Arabia to his home base at the CDC in Atlanta, searching for a cure and for the origins of this seemingly unknowable disease. The End of October is a one-of-a-kind thriller steeped in real-life political and scientific implications, filled with the insight that has been the hallmark of Wright’s acclaimed nonfiction and the full-tilt narrative suspense that only the best fiction can offer.

Lawrence Wright is a staff writer for The New Yorker, a playwright, a screenwriter, and the author of ten books of nonfiction, including The Looming Tower, Going Clear, and God Save Texas, and one previous novel, God's Favorite. His books have received many honors, including a Pulitzer Prize for The Looming Tower. He and his wife are longtime residents of Austin, Texas.

“A swift and all-too-convincing chronicle of science, espionage, action and speculation that moves from Indonesia to Saudi Arabia to the U.S. as it eerily evokes real-life current events.”
—The Wall Street Journal

“A fast-paced thriller with big, sweeping, made-for-the-adapted-screenplay action sequences. . . . The End of October is the perfect novel for a long airplane flight or a beach chair.”
—NPR

“[Wright] applies the magisterial force of his reporting skills into spinning a novel of pestilence, war, and social collapse that, given the current pandemic, cuts exceedingly close to the bone. . . . Chilling.”
—The New York Times Book Review

“[The End of October] imagines a global pandemic in which an unfamiliar virus works its way around the world, leaving economic meltdown, conspiracy theories, and mass death in its wake. . . . The propulsive plot is counterweighted with rigorous, gracefully presented context on the history and behavior of diseases.”
—The Atlantic

“A deeply researched scenario-play of a novel told in brisk, unsparing prose. . . . There’s a compulsive thrill to reading a book which grazes, and then runs off with, our increasingly ungraspable reality.”
—The Guardian

“Some works of fiction seem ripped from the headlines. Others anticipate the news, providing a prophetic vision of our future. Lawrence Wright's new novel, The End of October, belongs in the rare second category.”
—CNN

“What makes The End of October compelling to read right now is that Wright researched the hell out of what kind of infrastructure the US would need to survive a pandemic. He concluded that we did not have it. And then he drew on his formidable knowledge of domestic and international politics to imagine what would ensue. . . . Wright is undoubtedly a gifted reporter and observer of the world.”
—Vox

“Harrowing. . . . Wright is excellent at gracefully working the science of viruses into the narrative. . . . The second half is almost pure action—pure, heart-stopping action. . . . This book will wake you up, and keep you awake.”
—Minneapolis Star Tribune

“As captivating as it is disorienting. . . . Even taken as speculative fiction, the author approaches his subject with gravity befitting the stakes. . . . Throughout, Wright keeps the various threads pulled taut—medicine, military matters, international intrigue, economics.”
—The Texas Observer

“A thriller for our times. . . . Like all good thrillers, The End of October diverts us from the real world while keeping a firm base there, letting us imagine not only disaster but the ways out of it.”
—Tampa Bay Times

“[A] multifaceted thriller . . . Wright pulls few punches and imbues even walk-on characters with enough humanity that their fate will matter to readers. This timely literary page-turner shows Wright is on a par with the best writers in the genre.”
—Publishers Weekly (starred review)