The Accidental President: Harry S. Truman and the Four Months That Changed the World (Hardcover) 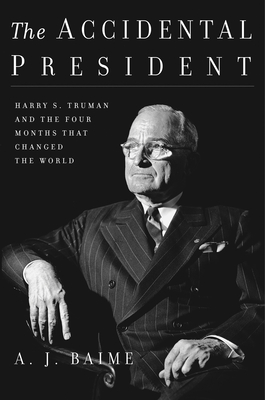 By A. J. Baime
Email or call for price
Out of Print

The dramatic, pulse-pounding story of Harry Truman’s first four months in office, when this unlikely president had to take on Germany, Japan, Stalin, and the atomic bomb, with the fate of the world hanging in the balance.

Heroes are often defined as ordinary characters who get thrust into extraordinary circumstances, and through courage and a dash of luck, cement their place in history. Chosen as FDR’s fourth term Vice President for his well-praised work ethic, good judgment, and lack of enemies, Harry S. Truman--a Midwesterner who had no college degree and had never had the money to buy his own home--was the prototypical ordinary man. That is, until he was shockingly thrust in over his head after FDR’s sudden death. During the climactic months of the Second World War, Truman had to play judge and jury, pulling America to the forefront of the global stage. The first four months of Truman’s administration saw the founding of the United Nations, the fall of Berlin, victory at Okinawa, firebombings of Tokyo, the first atomic explosion, the Nazi surrender, the liberation of concentration camps, the mass starvation of Europe, the Potsdam Conference, the controversial decision to bomb Hiroshima and Nagasaki, the surrender of Imperial Japan, and finally, the end of World War II and the rise of the Cold War. No other president had ever faced so much in such a short period of time.

Tightly focused, meticulously researched, rendered with vivid detail and narrative verve, THE ACCIDENTAL PRESIDENT escorts readers into the situation room with Truman during this tumultuous, history-making 120 days, when the stakes were high and the challenge even higher. The result is narrative history of the highest order and a compelling look at a presidency with great relevance to our times.

A. J. BAIME is the New York Times bestselling author of The Arsenal ofDemocracy: FDR, Detroit, and an EpicQuest to Arm an America at War, GoLike Hell: Ford, Ferrari, and Their Battlefor Speed and Glory at Le Mans, TheAccidental President: Harry S. Trumanand the Four Months That Changed the World, and Dewey Defeats Truman: The1948 Election and the Battle for America's Soul. Baime is a longtime regular contributor to the Wall Street Journal and his articles have also appeared in TheNew York Times, Popular Science, and Men’s Journal. He holds an MA in literature from NYU and currently lives in northern California.

"The story of Truman’s accession to the presidency is worthy of a Hollywood melodrama, and A.J. Baime’s zippy, well-judged and hugely readable book more than does it justice . . . although there are plenty of good biographies of Truman, few are as entertaining as Baime’s."
—Dominic Sandbrook, Sunday Times

"A.J. Baime is a master. His reporting and storytelling are woven to hypnotic effect. Opening the first page of The Accidental President is like pulling up a chair to Truman’s White House desk where we sit engrossed as world events unfold in the most intimate manner, titanic in scale. Baime brings us as close as we are likely to get to this completely surprising, quirky, wily, and transformational president. This is history and humanity in lush, vivid color."
—Doug Stanton, author of The Odyssey of Echo Company and Horse Soldiers

“A.J. Baime is a master storyteller, and The Accidental President contains everything a reader could ever want from a work of history: characters that jump off the page, tension that makes your pulse pound, and smooth, smart writing that makes you think. Amazing!”
—Jonathan Eig, author of Ali: A Life and Luckiest Man

"Intimate and absorbing, A.J. Baime's biography uses new sources to paint Harry Truman as a complex and thoroughly American figure. A sharply-drawn portrait of an era as well as a man."
–Stephan Talty,author of The Black Hand and Agent Garbo

“No president in history – particularly one who came in without having been briefed by his predecessor – has faced such monumental decisions. A.J. Baime has put a spotlight on those four months, recounting them faithfully and with heart, so that you come away with not only a sense of history, but a sense of the man, Harry Truman, as well. As Grandpa himself said a few years later, ‘It’s hell to be President of the Greatest Most Powerful Nation on Earth.’”
—Clifton Truman Daniel, Truman’s grandson and author of Growing Up with My Grandfather: Memories of Harry Truman

“An entertaining new history of Truman’s first months in office...filled with events that are strikingly proportionate to what the Trump administration has weathered since January.”
—John Batchelor, The Daily Beast

“A fast-paced, well-detailed chronology of Truman's transformation from an official with little administrative responsibility into a politically astute and ultimately beloved leader.... A warmly human portrait of an unlikely president.”
—Kirkus Reviews

"By relying mostly on primary sources, Baime allows for a better perspective of Truman, in which his political decisions are equally as significant as the correspondence with his beloved wife, daughter, and mother. He also adeptly manages to include nuanced U.S.-Russia relations and East Asian diplomacy."
—Library Journal (starred review)

"An attractive tale for fans of both presidential and WWII history. . . Baime opens a clear . . . window on a pivotal moment in history."
—Publishers Weekly

"Baime is a master story-teller who appears to have invented a time machine. His carefully crafted narrative transports the reader back in time... Each sentence is carefully constructed and colorfully packed with details that makes Harry Truman and this period in history come alive. The Accidental President reads more like a captivating novel than non-fiction. The book is good history in that it simplifies events without being simple."
—PresidentialHistory.com