The Hinge Of Fate (Paperback) 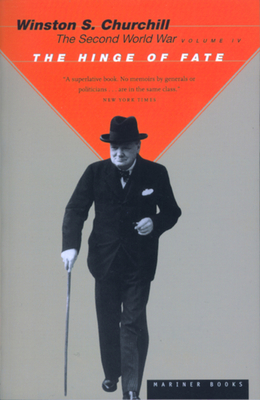 This is book number 4 in the The Second World War series.

The British prime minister's dramatic account of how the Allies turned the tide of World War II.

In the first half of the book, Winston Churchill describes the fearful period in which the Germans threaten to overwhelm the Red Army, Rommel dominates the war in the desert, and Singapore falls to the Japanese. In the span of just a few months, the Allies begin to turn the tide, achieving decisive victories at Midway and Guadalcanal, and repulsing the Germans at Stalingrad. As confidence builds, the Allies begin to gain ground against the Axis powers.

This is the fourth in the six-volume account of World War II told from the unique viewpoint of the man who led his nation in the fight against tyranny. The series is enriched with extensive primary sources, as we are presented with not only Churchill’s retrospective analysis of the war, but also memos, letters, orders, speeches, and telegrams, day-by-day accounts of reactions as the drama intensifies. Throughout these volumes, we listen as strategies and counterstrategies unfold in response to Hitler’s conquest of Europe, planned invasion of England, and assault on Russia, in a mesmerizing account of the crucial decisions made as the fate of the world hangs in the balance.