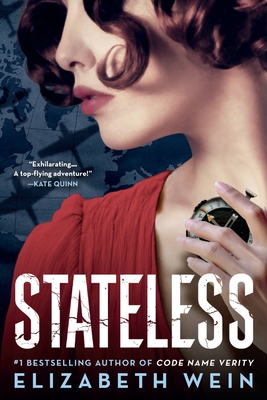 From the beloved #1 bestselling author of Code Name Verity, this thrilling murder mystery set in 1937 Europe soars with intrigue, glamour, secrets, and betrayal.

When Stella North is chosen to represent Britain in Europe’s first air race for young people, she knows all too well how high the stakes are. As the only participating female pilot, it’ll be a constant challenge to prove she’s a worthy competitor. But promoting peace in Europe feels empty to Stella when civil war is raging in Spain and the Nazis are gaining power—and when, right from the start, someone resorts to cutthroat sabotage to get ahead of the competition.

The world is looking for inspiration in what’s meant to be a friendly sporting event. But each of the racers is hiding a turbulent and violent past, and any one of them might be capable of murder…including Stella herself.

Elizabeth Wein is the holder of a private pilot’s license and the owner of about a thousand maps. She is best known for her historical fiction about young women flying in World War II, including the New York Times bestselling Code Name Verity and Rose Under Fire. Elizabeth is also the author of Cobalt Squadron, a middle grade novel set in the Star Wars universe and connected to the 2017 release The Last Jedi. Elizabeth lives in Scotland and holds both British and American citizenship. She invites you to visit her online at www.elizabethwein.com.

“Intrigue and danger in the air and on the ground make for an exciting read that is steeped in interwar history…. Thrilling.” —Kirkus Reviews

"A beautifully crafted novel soaring straight through the golden age of aviation into the darkening clouds of a coming war. A riveting, thought-provoking, page-turner."—Sharon Cameron, #1 New York Times bestselling author of The Light in Hidden Places

"Elizabeth Wein does it again! You’re not going to want to miss a minute of this high flying game of cat and mouse. Stateless is simply spectacular."—Sherri L. Smith, award-winning author of Flygirl

"Stateless is a soaring, immersive exploration of what it means to belong. I loved it."—Stacey Lee, New York Times bestselling author of The Downstairs Girl

Praise for The Enigma Game:

“Even if you’re not one for “war stories,” you’ll likely get caught up in the breathless thrill-ride of Wein’s newest World War II novel. [I]ts twisty plot, multivoiced narration, and poetic prose make it fly by. It’s an illuminating historical read and a realistic depiction of the costs of war.”

* "This is historical fiction at its finest...another soaring success."—Kirkus Reviews, starred review

* “Compelling and emotionally taut…Wein's story of unexpected friendship and empowerment during wartime is intelligent, compassionate and thrilling."

* "A comprehensive, believable, and engaging page-turner that should not be missed."—School Library Connection, starred review

"Exhilarating and atmospheric.... Just the ticket for lovers of historical thrillers and Wein's many fans."—School Library Journal