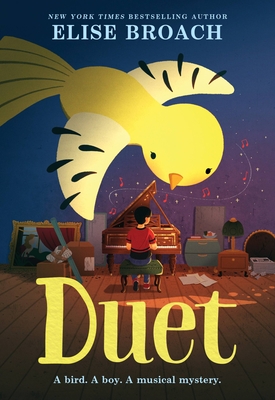 Welcome to the world of Mirabelle, a young goldfinch who loves to sing and dreams of becoming a musical star. She lives with her family in the backyard of a piano teacher, and she is quickly intrigued by Mr. Starek's newest pupil. Michael Jin is an eleven-year-old keyboard sensation, but lesson after lesson, he refuses to play.  With the prestigious Chopin Festival looming at summer’s end, how will he be ready in time?  Mirabelle is responsible for Michael’s breakthrough—to her own astonishment, she sings the Chopin piece he is beginning to play at the piano. It is their first duet.

Thus begins a secret adventure that will take Mirabelle and Michael further than they ever imagined—in music, in friendship, and in solving the mystery of a lost piano that could be worth millions.  A house full of treasures holds the clues. There, Mirabelle, Michael, and their friend Emily will make an important discovery that links the great composer Frederic Chopin, the trailblazing author George Sand, and the French Romantic painter Eugene Delacroix.

A fast-paced, history-rich mystery will have young readers hooked as they root for boy and bird in this beautifully told novel, full of emotion and suspense.

Elise Broach is the New York Times bestselling author of many books for children and young adults, including Masterpiece, Shakespeare’s Secret, The Wolf Keepers, Desert Crossing, the Superstition Mountain trilogy, and the Masterpiece Adventures chapter book series. She lives in Connecticut. Elise invites you to visit her at elisebroach.com

* "Narrated by Mirabelle, a goldfinch with an exceptional voice, this soulful story set near Boston offers a bird’s-eye view of three friends bound together by their passion for music…. Rich with facts around goldfinches and music, Broach’s (the Masterpiece Adventure series) novel employs vivid descriptions (“It comes in a torrent, a rush of silvery notes cascading over one another”), unique characters, and carefully crafted suspense."—Publishers Weekly, starred review

* "The story involves a treasure hunt, but it revolves around the characters’ love of music and the sense of wonder that it inspires . . . Mirabelle’s lively, accessible first-person narrative offers a fresh perspective on the lives of birds and keen perception of the human characters. . . . This captivating chapter book is perfect for readers who, like Mirabelle, are sometimes spellbound by music."—Booklist, starred review

"This story illustrates an appreciation for excellence and the passion to create music just for the joy of it. A quick and interesting musical read, full of history and mystery."—Kirkus Reviews

"This marvelous story is sure to be a hit."

Praise for The Wolf Keeper's: