The Boy in the Moon: A Father's Journey to Understand His Extraordinary Son (Paperback) 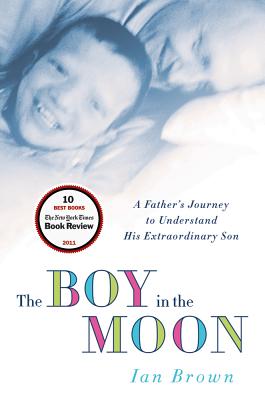 The Boy in the Moon is Ian Brown's powerful, honest, and emotionally complicated memoir of raising his son, Walker—one of only a few hundred people worldwide who live with an extremely rare genetic mutation.

Born with CFC (cardiofaciocutaneous) syndrome, Walker Brown is a mystery, as remote to his family as the moon. Unable to speak or swallow, compelled to hit himself, requiring surgeries, and round-the-clock care, he becomes the focus of his father's keen intelligence. An investigative journalist, Ian Brown traveled the globe, meeting with genetic scientists and neurologists as well as parents of similar children, seeking ways to reach—and perhaps cure—his son. As Brown becomes part of a community of families, he lets go of his self-blame and his desire to "fix" Walker, learning to accept the boy he loves, just as he is.

A New York Times Top 10 Book of 2011, The Boy in the Moon is an extraordinary memoir that explores the value and the meaning of every human life, through the eyes of one father, searching for his son.

Ian Brown is an author and a feature writer for The Globe and Mail. His book The Boy in the Moon has won three of Canada’s most prestigious literary awards: the Charles Taylor Prize, the Trillium Book Award, and the British Columbia National Book Award for Nonfiction.

“The truth Brown learns from his severely disabled child is a rare one: The life that seems to destroy you is the one you long to embrace.” —New York Times Book Review

“A father's candid, heart-wrenching account of raising, loving and trying to connect with and gain insight into his severely disabled son...Much more than a moving journal of life with a disabled child; it is about Brown's quest to understand his son and his son's condition...An absorbing, revealing work of startling frankness.” —Kirkus Reviews

“Unforgettable...Crisp, observant and, occasionally, subversively funny...In the end, as in the beginning, Brown questions the value of a life like Walker's, "lived in the twilight and often in pain." He sometimes locates it in Walker himself. Another answer is this book.” —Cleveland Plain Dealer

“A stark, lovely memoir…fiercely plainspoken and lyrical” —The Boston Globe

“Brown presents a moving and deeply felt account of his life with his son Walker, who is one of fewer than 300 people in the world who were born with CFC, cardiofaciocutaneous syndrome…the book describes Brown's fascinating worldwide investigations into the various living situations offered to people with CFC as well as his visits with other families whose children have CFC.” —Publishers Weekly

“[An] intimate glimpse into the life of a family that cares around the clock for a mysterious, profoundly disabled child, that gets so close to the love and despair, and the complex questions the life of such a child raises...It is a beautiful book, heartfelt and profound, warm and wise.” —Jane Bernstein, author of Loving Rachel and Rachel in the World