I Keep Trying to Catch His Eye: A Memoir of Loss, Grief, and Love (Paperback) 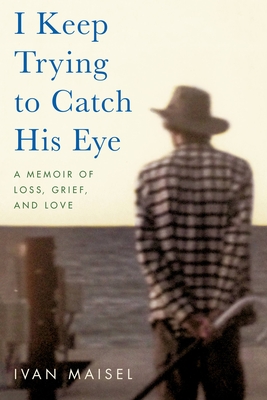 In this deeply emotional memoir, a longtime ESPN writer reflects on the suicide of his son Max and delves into how their complicated relationship led him to see grief as love.

In February 2015, Ivan Maisel received a call that would alter his life forever: his son Max's car had been found abandoned in a parking next to Lake Ontario. Two months later, Max's body would be found in the lake.

There’d been no note or obvious indication that Max wanted to harm himself; he’d signed up for a year-long subscription to a dating service; he’d spent the day he disappeared doing photography work for school. And this uncertainty became part of his father’s grief. I Keep Trying to Catch His Eye explores with grace, depth, and refinement the tragically transformative reality of losing a child. But it also tells the deeply human and deeply empathetic story of a father’s relationship with his son, of its complications, and of Max and Ivan’s struggle—as is the case for so many parents and their children—to connect.

I Keep Trying to Catch His Eye is a stunning, poignant exploration of the father and son relationship, of how our tendency to overlook men’s mental health can have devastating consequences, and how ultimately letting those who grieve do so openly and freely can lead to greater healing.

Ivan Maisel is Vice-President, Editorial, and Senior Writer for on3.com.  He has covered college football for nearly four decades, from 2002-2021 at ESPN, where he wrote for ESPN.com and appeared on television, ESPN Radio, and podcasts.  Prior to ESPN, Maisel covered national college football for Sports Illustrated, Newsday and The Dallas Morning News.  He has been honored eight times for Best Story by the Football Writers Association of America, and twice by The Associated Press Sports Editors, which in 2019 named him one of the ten best sports columnists.

"[A] beautiful and heart-wrenching work... Flashbacks to Max's childhood make him a vivid personality, and photos of him throughout render the author's grief devastatingly visceral... Maisel writes honestly... The result yields a deeply affecting testament to the fragility of life, and the human capacity for resilience."—Publishers Weekly

"At the center of this beautifully written memoir by a father about his son Max, is a loving, devoted family. Ivan is a sportswriter, his clean, direct writing style is riveting and emotional. One winter day, when his son goes missing on purpose, the family unspools first in shock, then grief, and finally redemption as the author finds a letter written to him from Max from happier times. There is so much love in this memoir, the reader too, is redeemed. There is humor and grace as the Maisels find their way in the world without this beautiful soul in their midst. The family holds their memories of this original, one of a kind young man in their hearts. You will too. I couldn't put it down."—Adriana Trigiani, bestselling author of The Shoemaker's Wife

“This is a poignant memoir about the love that propels us to carry on and move forward after loss. Ivan Maisel gives voice to emotions that many of us have felt but few have been able to articulate.”—Adam Grant, #1 New York Times bestselling author of Think Again and coauthor of Option B

“This is a story about grief, and loss and sorrow, yes. But it is also a story about triumph over those things, about love, devotion and grace.”—Wright Thompson, New York Times bestselling author of Pappyland

“Having lost a child myself, it’s hard for me to imagine a parent experiencing anything that is more painful. Losing a child to suicide adds another layer to the grief because we can’t understand why it happened. In I Keep Trying To Catch His Eye, Ivan Maisel shares his family’s story of losing a son to suicide. He examines some deep issues that aren’t easy for us to talk about—suicide, mental health, grief, and recovery.  This book will be helpful to anyone dealing with the loss of a loved one but especially to those who have been impacted by suicide.”—Tony Dungy, NBC Sports, former NFL player/head coach and member of the Pro Football Hall of Fame

"Loss and grief create a division between the uninitiated and those who speak the language. Maisel's gem of a book bravely bridges two worlds to help translate the many facets in grieving a child's death. Unvarnished and unsparing, this award-winning sportswriter turns the lens on his own journey to make sense of the unimaginable, demonstrating how we get through it without ever getting over it."—Lee Woodruff, #1 New York Times bestselling author of In An Instant

"An intimate chronicle of abiding love."

"[A] poignant, understated memoir... Those who have lost a child will find a kindred spirit here."
—Booklist

"For those who read this work, we see Max as he was. We see a family that makes the best they can through a time of grief. And we see that the human spirit, the will to both hold on and move on are both valid and necessary. And in that final understanding we find a way into each day’s new dawn. And for that and so much more, I cannot recommend this book enough."

"Losing a child is every parent’s nightmare; losing one to suicide deepens the anguish unimaginably. Here, a father shares his grief and valuable lessons on how he carries on."—People Magazine

"His deeply personal and moving book, I Keep Trying to Catch His Eye: A Memoir of Loss, Grief and Love, is a testament both to a father’s love and to the human soul’s ability to grieve and remember and still not lose hope." —Kerri Miller, Minnesota Public Radio