Pow! Right in the Eye!: Thirty Years behind the Scenes of Modern French Painting (Abakanowicz Arts and Culture Collection) (Hardcover) 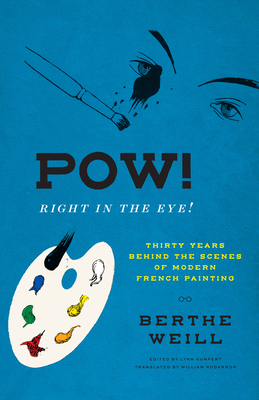 Memoir of a provocative Parisian art dealer at the heart of the 20th-century art world, available in English for the first time.

Berthe Weill, a formidable Parisian dealer, was born into a Jewish family of very modest means. One of the first female gallerists in the business, she first opened the Galerie B. Weill in the heart of Paris’s art gallery district in 1901, holding innumerable exhibitions over nearly forty years. Written out of art history for decades, Weill has only recently regained the recognition she deserves.

Under five feet tall and bespectacled, Weill was beloved by the artists she supported, and she rejected the exploitative business practices common among art dealers. Despite being a self-proclaimed “terrible businesswoman,” Weill kept her gallery open for four decades, defying the rising tide of antisemitism before Germany’s occupation of France. By the time of her death in 1951, Weill had promoted more than three hundred artists—including Henri Matisse, Pablo Picasso, Amedeo Modigliani, Diego Rivera, and Suzanne Valadon—many of whom were women and nearly all young and unknown when she first exhibited them.

Pow! Right in the Eye! makes Weill’s provocative 1933 memoir finally available to English readers, offering rare insights into the Parisian avant-garde and a lively inside account of the development of the modern art market.

Lynn Gumpert is director of the Grey Art Gallery at New York University. She is coeditor of Taking Shape: Abstraction from the Arab World, 1950s–1980s.

William Rodarmor is a translator of books including Claudine Cohen’s The Fate of the Mammal: Fossil, Myth and History and Bernard Moitessier's Tamata and the Alliance, which won the 1996 Lewis Galantière Award from the American Translators Association.


Marianne Le Morvan, PhD, is the founder of the Berthe Weill Archives. She is a provenance researcher, guest curator of exhibitions, and the author of several books of art history.

Lynn Gumpert is director of the Grey Art Gallery at New York University, where she has overseen more than seventy exhibitions.

"Now published in English for the first time, Weill’s fast-paced and punchy account of her gallery’s first 25 years of exhibitions is a who’s who of emerging artists in early-twentieth century Paris, the collectors who bought their work, and how much they paid. . . .She paints a clear portrait of how modern masters like Metzinger and Matisse, alongside lesser known painters like Émilie Charmy, shook up modern art and modern culture even before there was a market for their work."
— Maggie Taft

"The overall message of Pow! is one of resistance in the face of an elitist, male-dominated art world."
— Alex Greenberger

“Pow! Right in the Eye! reveals the visionary trajectory of Berthe Weill’s life and work. Incredibly open to taking risks, Weill exhibited many of the twentieth century’s greatest artists while they were still early in their careers. This wonderful book is an urgent protest against forgetting this great gallerist and her journey of endless experimentation.”
— Hans Ulrich Obrist, Serpentine Galleries, London

“Berthe Weill changed the course of art history. With her memoir, a fantastically idiosyncratic and idiomatic adventure that is part confession and part invective, she rewrites that hallowed history as a telling corrective that anyone who cares about art, then and now, needs to read. Every twist and turn here reveals far more than simply an in-the-trenches account of the difficulties of presenting the young and new to an indifferent world—it is a stunningly humble self-portrait of the extreme disadvantages faced by an underprivileged Jewish woman confronting the issues of class, anti-Semitism, and sexism, as elegant and sturdy as Picasso’s famous portrait of her."
— Carlo McCormick, critic and curator

“Berthe Weill’s compelling memoir is a raucous and often humorous saga of a courageous champion of avant-garde art in Paris during the early twentieth century. The story of the first gallery dedicated to contemporary emerging artists—founded by a woman amidst a market-driven, all male art world—continues to resonate strongly to this day.”
— Paula Cooper, Paula Cooper Gallery