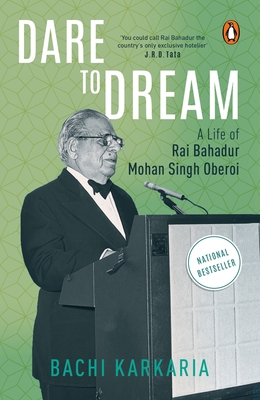 Born in a small village in Punjab at the turn of the century, Rai Bahadur Mohan Singh Oberoi began his career in the industry at Shimla's Cecil Hotel on a monthly wage of Rs 50. But he was not destined to remain in that position for long. With a combination of clear-sighted thinking, frugality and sheer hard work, he managed to put together a plan and the finances necessary to acquire his first hotel, Clarkes. That was only the beginning. Decades later, the Oberoi Group has over thirty-one luxury hotels and two river cruise ships in six countries, and is acknowledged as a standard to aspire for. In this well-researched and candid biography, written with the cooperation of the late M.S. Oberoi, Bachi Karkaria describes how a man from modest beginnings became the head of an internationally celebrated hotel chain. It also shows how a major business is built up, run and kept at the top.

Bachi Karkaria is a pioneer in Indian journalism, and the creator of path-breaking brands for the Times Group. She is also a popular columnist, bestselling author, literature festival curator and international media trainer. She was the first Indian board member of the Paris-based World Editors Forum, a Jefferson Fellow from Hawaii's East-West Center, and the recipient of the Mary Morgan-Hewitt Award for Lifetime Achievement. Karkaria's books include the critically acclaimed bestseller In Hot Blood: The Nanavati Case That Shook India; Mills, Molls and Moolah; Behind the Times; Mumbai Masti; The Cake That Walked; and collected editions of her columns in various publications.