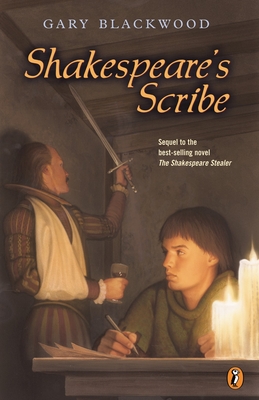 When an outbreak of the deadly Black Plague closes the Globe Theatre, William Shakespeare's acting troupe sets off on a tour of England. Widge, the orphan-turned-actor, knows that he'll be useful on the trip. Not only does he love the stage, but his knack for a unique shorthand has proven him one of the most valuable apprentices in the troupe. But then a mysterious man appears, claiming to know a secret from Widge's past-a secret that may forever force him from the theatre he loves.

"An exciting, well-written tale that is sure to leave [readers] clamoring for more." (School Library Journal, starred review)

Gary L. Blackwood sold his first story when he was nineteen, and has been writing and publishing stories, articles, plays, novels, and nonfiction books regularly ever since. His stage plays have won awards and been produced in university and regional theatre. Nonfiction subjects he's covered include biography, history, and paranormal phenomena. His juvenile novels, which include WILD TIMOTHY, THE DYING SUN, and THE SHAKESPEARE STEALER, are set in a wide range of times and places, from Elizabethan England to a parallel universe. Several have received special recognition and been translated into other languages. He and his wife and kids live outside Carthage, MO.