Ali and the Sea Stars (Hardcover) 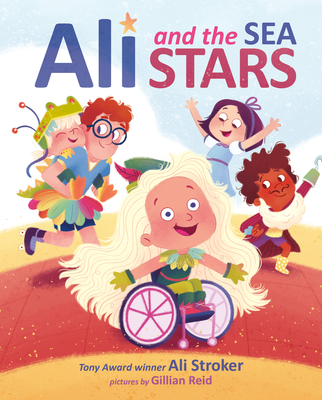 Tony Award-winning actress Ali Stroker captures the magic and community of theater in her debut picture book, about a spirited girl in a wheelchair who stages a show for her hometown. Based on the pivotal summer Ali performed in her first musical by the Jersey Shore!

Ali loves to dance, sing, and act. But she had never thought of putting on her own show until her neighbor asks, "Why wait?" Immediately energized, Ali gets to work.

There’s so much to do before showtime—choosing the right musical, auditions, rehearsal, costume and set design—but Ali can do anything with her family and friends. When a storm threatens to undo all their hard work, Ali must use her imagination and adapt so the show can go on!

Includes an inspiring letter from Ali to readers on how she developed confidence while on-stage and how theater encourages teamwork and creativity.

won the 2019 Tony Award for Best Featured Actress in a Musical for her role as Ado Annie in Rodgers and Hammerstein’s Oklahoma! She made history as the first actor in a wheelchair to appear on Broadway in Deaf West’s acclaimed 2015 revival of Spring Awakening. She was featured on The Glee Project, had a guest role on Fox’s Glee, and appeared on Only Murders in the Building and The Bold Type. Ali starred in the Lifetime holiday film Christmas Ever After. She also recently cowrote a novel, The Chance to Fly, and has performed her cabaret act at the Kennedy Center in Washington, DC, New York’s Town Hall, Lincoln Center for the Performing Arts, and Carnegie Hall. Her mission to improve the lives of others through the arts, disabled or not, is captured in her motto: “Turning Your Limitations into Your Opportunities.” Visit her online at www.alistroker.com.

Gillian Reid is an illustrator of books, a character designer of animated shows, and a professor of life drawing. Originally from the United Kingdom, she now lives in Canada with her partner and two cats. She loves to draw, watch movies, and do yoga. Visit her at www.gillian-reid.com.

“This whimsical ode to performance and collaboration will entrance and entertain.” — Booklist