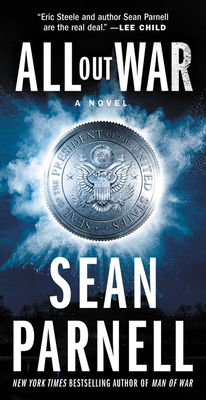 This is book number 2 in the Eric Steele series.

Special operative Eric Steele, introduced in Man of War, is on the hunt for a formidable Russian terrorist in this high-intensity tale of international intrigue from the author of the New York Times bestselling memoir Outlaw Platoon.

Badly injured while stopping a rogue agent from obtaining weapons of mass destruction, elite warrior Eric Steele is drawn back into service before he’s ready when unknown assailants break into his home near Pittsburgh, injuring his mother and stealing his father’s pistol.

An Alpha—an elite soldier under the direct command of the president of the United States—Steele is hell-bent on finding the attackers and bringing them to justice. While tracking his foe, Steele discovers he’s become entangled in a far more sinister plan that’s already been set in motion.

A terrorist named Zakayev, once locked away in a maximum-security prison in Russia, has escaped and joined forces with Hassan Sitta, a man who’s shown his prowess and ingenuity with a spectacular bomb planted somewhere in the Middle East that hasn’t been ignited—and no one can find. But that is only the beginning of a horrifying plan that, if it succeeds, will shatter international alliances and bring the world to the brink of war.

Now, the hunted must turn the tables on the hunter—Steele must find a way to stay alive and stop Zakayev before innocent lives are lost.

Sean Parnell is a former U.S. Army airborne ranger who served in the legendary 10th Mountain Division for six years, retiring as a captain. He received two Bronze Stars (one for valor) and the Purple Heart. He is a passionate supporter of America's military and is currently serving as an ambassador for the Boot Campaign, a national veteran's charity. He lives with his three children in Pittsburgh, Pennsylvania.

“A fast-paced, all-out action-fest… Steele is the kind of adventure hero whom everyone will want to see succeed, and here he’s up against antagonists who define sheer villainy… Parnell has jumped to the top of the military-thriller class, right up there with Brad Thor and Vince Flynn.” — Booklist (starred review)

“The mission becomes increasingly complex, dangerous, and engaging once Steele learns that the attack on his home is tied to assassination plans for some of the world’s most prominent leaders… A well-written and well-researched page-turner.” — Kirkus Reviews

“Sean Parnell continues to impress with his second novel, a timely action thriller that brings the pain in a big way… Readers will enjoy following Eric Steele as he goes to work killing bad guys and trying to save the world.” — RealBookSpy

“There is never any lack of action, and putting this thriller down is a tall order.” — Lima Charlie

“Man of War is a breakneck-speed thriller with enough action and combat to satisfy any reader.  Eric Steele is a one-man army, and Sean Parnell uses his background in tactics and weapons to bust into the ranks of the best thriller writers out there.” — C.J. Box,  #1 New York Times bestselling author of The Disappeared