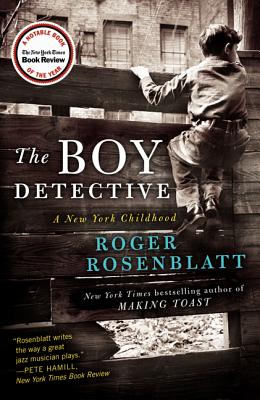 Resisting the deadening silence of his family home in the elegant yet stiflingly safe neighborhood of Gramercy Park, nine-year-old Roger Rosenblatt imagines himself a private eye in pursuit of criminals. With the dreamlike mystery of the city before him, he sets off alone into the streets of Manhattan, thrilling to a life of unsolved cases.

Six decades later, Rosenblatt finds himself again patrolling the territory of his youth. He investigates the lives of the writers who walked these streets before him, such as Poe and Melville; the great detectives of fiction and the essence of detective work; and the monuments of his childhood, such as the New York Public Library and the Empire State Building.

A masterly evocation of the city and a meditation on memory as an act of faith, suffused with a mixture of acute observation and bracing humor, lyricism, and wit, The Boy Detective treads the line between a novel and a poem, displaying a world at once dangerous and beautiful.

Roger Rosenblatt  is the author of six off-Broadway plays and eighteen books, including Lapham Rising, Making Toast, Kayak Morning and The Boy Detective. He is the recipient of the 2015 Kenyon Review Award for Literary Achievement.

“With the beautiful, lyrical writing and thoughtful reflection for which he is known, Rosenblatt offers beautifully rendered memories of childhood and ongoing curiosity about the city he so obviously loves.” — Booklist

“Memoir, urban travelogue or summing up of a career grounded in the written word, Roger Rosenblatt’s The Boy Detective is an elegant and wise journey through an incomparable city and a meaning-filled life.” — Shelf Awareness

“… the memoir is, at its heart, a valentine to the New York City of the ‘50s and today, and to the author’s favorite detective stories and films. . . No matter where you’re from, his story resonates.” — People (4 stars)

“A hallmark of memoir is the self now reflecting on the self then. This book pulls off the high wire feat of illuminating that double identity and giving readers the mental atmospheres of both narrators, the rascal back then and the reflective adult today…deliciously satisfying. — New York Journal of Books

“Funny, intelligent, page-turning, this memoir doesn’t just describe a 1940s childhood in New York City; rather, it ruminates on the life of an artist born in and shaped by its streets.” — Daily Beast

“Rosenblatt’s writing is honest, yet it produces a magical world unto itself…” — Publishers Weekly (starred review)

“THE BOY DETECTIVE is filled with curves and knuckleballs and the occasional spitter. Hey, pal, have fun catching.” — USA Today

“That Roger Rosenblatt’s THE BOY DETECTIVE has no table of contents will make perfect sense to readers who follow the meandering path that constitutes his charming memoir of growing up around Gramercy Park. Categorizing his musings would be too confining.” — New York Times

“The book is rich with recollections and with the lush wanderings of memory and imagination. In combination they draw the reader into one of the most entertaining, thoughtful and deeply moving minds among nonfiction writers today… [a] quiet, triumphant ambulation, a characteristically eloquent and multiply rewarding book.” — Washington Post

“Roger Rosenblatt’s evocative memoir, The Boy Detective, also challenges easy categorization. His book combines a walking tour around vanished Manhattan with a meditation, not only on the classic mystery fiction he loves, but also on those larger metaphysical mysteries that defy even the shrewdest detective’s reasoning.” — NPR's Fresh Air

“Readers who believe a journey is worth more than the destination will find a kindred spirit in Rosenblatt, who is generous company during his wanderings.” — Christian Science Monitor

“…beautifully evocative essay - at once a memoir and a meditation on the form itself.” — New York Times Book Review, Paperback Row