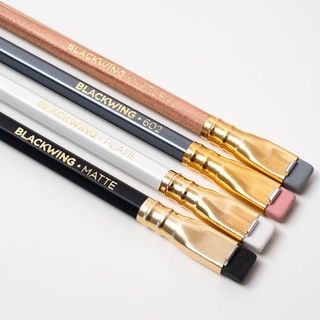 From their website: Blackwing pencils are crafted using the best materials in the world: Genuine Incense-cedar and premium Japanese graphite.

The Blackwing 602 pencil was introduced in the 1930’s by Eberhard Faber and was the pencil of choice for Oscar, Grammy, and Pulitzer Prize winners throughout the 20th century. After it was discontinued in the 1990’s, fans began paying as much as $40 per pencil to seize unused stock.

In 2010, Palomino, whose industry roots were planted over a century ago, revived the Blackwing to much critical acclaim.

We also carry Blackwing journals- with each coming with a pencil attached.